When I buy meat in bulk or have an animal slaughtered…
How Much Eating Meat Will I Get?

There’s no exact answer to this question!

See, each animal is built differently.  Animals, like people, come in varying shapes and sizes, even when from the same gene pool.  They differ in build and size, even when breeding rare and heritage strains. One may have a higher fat to muscle ratio. One may have naturally leaner tissue.  One may have a more dense bone mass.

Then, there’s the butchering. Cutting preference will always impact quantity, and in many ways can affect quality.  We like our meat trimmed minimally to leave the good stuff on. Supermarkets trim lean. We like our fat left on. Some butchers will remove and discard this natural flavour enhancer. Then, there’s the whole bone-in or bone-out issue, which will make a lot of difference to just how much meat you can fit into your freezer. 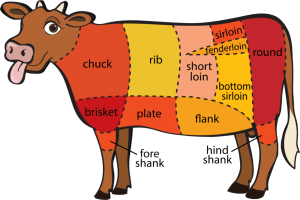 Do I pay for the weight of the cow before or after slaughter?

Slaughtering the cow removes the head, tail, organs, blood, hide, and any inedible parts from the animal.  In beef and lamb, this can be a loss of around 40% of the beasts body weight.  In pork and game, it accounts for around 25-30%. 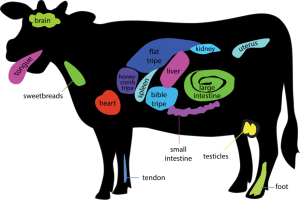 [dropshadowbox align=”none” effect=”lifted-both” width=”auto” height=”” background_color=”#ffffff” border_width=”1″ border_color=”#dddddd” ]Example: If your yearling weighs 500 kg live weight, it will most likely weigh 290-324 kg when slaughtered – or ‘dressed’. This is 58-60% of the live weight. [/dropshadowbox]

Do I pay for the weight of the cow before or after dressing?

After slaughtering, or ‘dressing’, comes the processing or butchering. This is the cutting of the dressed carcass meat into  ready to cook portions such as steaks, roasts, etc. This accounts for another loss in weight as excess fat and bones are trimmed away.  The more fat and bone trimmed away, the greater the loss of weight.

The fatter the carcass, the lower the final weight of the ready to cook packed meats will be.

[dropshadowbox align=”none” effect=”lifted-both” width=”auto” height=”” background_color=”#ffffff” border_width=”1″ border_color=”#dddddd” ]For example, if your pig carcass weighs 83kg, you can expect around 50-63 kg of trimmed eating meat after butchering – 60-75% of of the dressed weight. [/dropshadowbox] 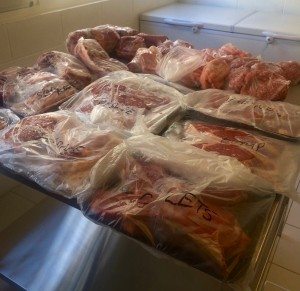 So, can you give me a rough idea of how much meat I will get?

Here’s a little video we made on delivery day in May 2016, so you can see just what you get for your dollar.

If you've been waiting for our award winning @burr

Not many left now. A month to go and the geese sho

Garlic scapes straight out of the garden make THE

Lots of enquiries this week, on where can people b

Have you checked out @pipitrestaurant SALUMI SUNDA